Every nation, every tribe,
Come together to worship You.
In Your presence we delight,
We will follow to the ends of the earth.

Alleluia, Alleluia,
Receive the Power, from the Holy Spirit.

Just under three years ago at an abandoned airfield near Cologne in Germany, Pope Benedict XVI declared that the world’s youth would gather together in Sydney in 2008. Today, two weeks after the World Youth Day 2008 celebrations concluded, I sit inspired and energized yet also humbled by the experience we shared as pilgrims in Sydney.

Homebush, Monte Sant’ Angelo, Randwick, Healesville, Lilydale, Barangaroo, North Sydney. Locations on various maps. Sets of instructions in Pilgrim Handbooks. Each of these is true but at the same time, the descriptions fail miserably. These sites are now part of a pilgrimage, our pilgrimage. Sites in our journey towards a deeper and more personal faith. Stages in our growing relationship with Jesus of Nazareth. 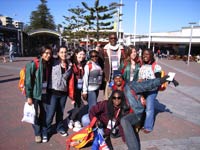 In conclusion, I wish to extend a deep and genuine thanks to each of the students who made Sydney 2008 such a special time, to Jaoa and Dedi who opened our eyes to a global community of faith, and in particular, to each of the staff who supported and assisted me and our pilgrims. A special thanks to Mrs. Libby Bromiley for her ceaseless efforts leading up to Days in the Diocese and World Youth Day and her support while we were away.

Some thoughts from our student pilgrims

The 500,000 pilgrims who came from near and far for the World Youth Day Pilgrimage proved that Catholicism is still alive and well in the hearts and minds of the world’s youth. This became abundantly clear as one walked through the streets of Sydney to the tune of drums, tambourines, and pilgrims chanting “Benedetto, Benedetto”. It was also evident at the concert following the Opening Mass, where one could go up to a group from the US, Brazil, Italy or Ireland etc and start talking, singing and dancing with them without feeling inhibited or unwelcome. World Youth Day proved to be a refreshing and re-energising experience which definitely strengthened my commitment to my faith and which I have brought back with me. I will forever treasure World Youth Day as a major highlight of my life. 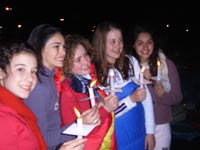 Beginning on Sunday 13th July, 59 students and 14 staff from Mount Lilydale Mercy College took part in a once in a life time experience of spiritual enlightenment. We united together as one to celebrate being young Catholics in the presence of Pope Benedict XVI. It was a fantastic opportunity for the half a million pilgrims from around the world who attended. Some of our highlights were meeting lots of awesome and interesting people from all over the world, exchanging gifts such as flags with them, going to the Opening Mass after which we let go and had a ball dancing, the Stations of the Cross, the walk to Randwick, the sleep out and of course the Mass led by the Pope himself. It was worth the effort we took to get there because the group was so close by the end of the trip. It’s an experience we’ll never forget. 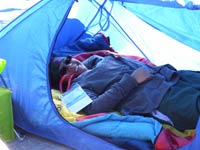 Standing in a crowd, at Randwick Racecourse (Southern Cross Precinct), with over 400,000 people, all from different places in the world, made me realise that I am part of such a huge, universal community.

This experience, which I shared with 30 peers from my year group, was truly a wonderful adventure and a journey of friendships and spiritual emancipation. This community of people were so friendly and welcoming, and from this community came new friendships, new languages and a new perception of living and learning from others. Catholics from countries such as Brazil, Spain, Germany, Philippines and Italy brought with them, to Sydney, an enjoyable and outgoing culture.

I chose to go on World Youth Day, not only in an attempt to become closer with God, but to celebrate the events with other young Catholics from all over the world without being embarrassed or ashamed of my religion. Seeing Pope Benedict XVI in real life, and hearing his speeches and homily was a life changing moment and one that I will never forget. This trip caused the group to grow closer with each other and spark friendships that ceased to exist before Sydney.

Learning more about our faith made me become more aware and more understanding of topics that I wasn't able to grasp before, and the catechesis sessions were a highlight and a big help. Catechesis involved waking up at 8am, to be at the session by 8:30am, but after whingeing and complaining, we were entertained and intrigued by talks from Bishops, the Hamish and Andy presenters and concluding with mass. Sydney became a place of belonging.

For so many people brought together by such a powerful force, it was truly inspirational and encouraging to be part of such a special congregation of pilgrims. World Youth Day 2008 is something I will never forget and it will forever be a part of me. I encourage all young Christians to make every effort to be part of World Youth Day 2011 in Madrid, Spain.