Many will remember this day as the highlight of the pilgrimage. The young Mercy leaders and their teachers/chaperones were given a tour of Catherine McAuley’s first foundation at 64A Lower Baggot Street, Dublin. They also attended a variety of workshops during the day. 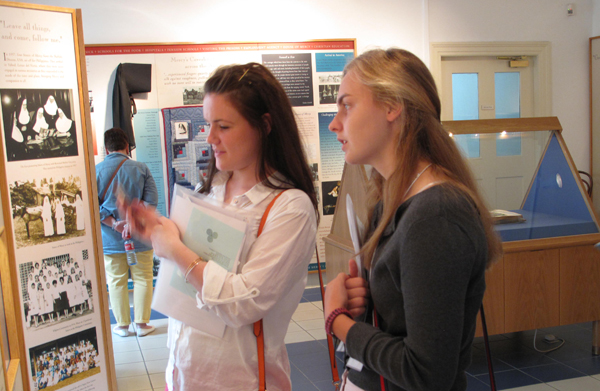 On tour in the MIC Heritage Room

The day began for all the participants at 9.30am. The sky was a deep blue and the warm sun welcomed everyone. The participants arrived full of energy and anticipation and some were visibly moved when they entered the building. The programme for the day began in the International Room where they were introduced to the life and work of Catherine McAuley and the ongoing work of Mercy in the world.

The centrepiece for the morning ritual was a spiral made of candles which surrounded the Catherine Mc Auley perpetual flame. As part of the morning ritual each person received a candle which s/he would later bring to the chapel to place on the decorative ‘canal’ which represented Catherine’s many journeys by barge on the Grand and Royal canals.

The participants sat around on the floor as Mary Reynolds rsm painted a word picture of the living conditions of the poor when Catherine set about her work in Dublin and elsewhere. She explained how Catherine, ever conscious of the need for education to enhance the lives of the poor, went to France to study what was then regarded as, possibly, the most advanced system of education in the world. Within a very short time of setting up her school Catherine and her helpers were teaching approximately 200 children daily. Her work in education was so successful that she was soon receiving requests for foundations not only from other parts of Ireland but also from as far afield as Newfoundland.

Following this presentation the young Mercy Leaders were taken on a tour of the building. The Chapel was first on the tour. Here the participants gathered for prayer and song. As part of the ritual here they placed their candles on the coloured ‘canal’ to create a ‘stream’ of light. During the ritual sunbeams lit the chapel from the east windows creating pools of light on the floor and haloes of light around some of the young leaders.
The Callaghan room gave the group a hint of the style in which Catherine lived when she was a member of the Callaghan household. Her extraordinary generosity in leaving all of this behind so that she could devote her life to helping the poor is all the more impressive.

The tour took the participants to Catherine’s own room where some items used by her are on display. The simple style and sparseness of this room is in stark contrast to the Callaghan room. This was also the room in which Catherine died and far from being a sad place it is one where all who view it are filled with awe and gratitude for the work of this great woman.

The fifth stage of the tour took the leaders to the Heritage Centre where many artefacts including Catherine’s ring, prayer book and cloak were on display. Here they learned about life in the slums in the 1830s when there was no electricity, running water or any form of sanitation – conditions which are difficult to envisage today.

The final stop on the tour was the grave of Venerable Catherine McAuley. Here they heard the story of Catherine’s burial and the death and burial of the first young sisters of Mercy. Mercy International Association keeps a candle burning on Venerable Catherine’s grave and all who request prayers are remembered here.

The evening was full of activity which included a music practice and an evening process. After tea all assembled in the auditorium for an entertaining talent show - and entertaining it was! What can one say about such talent and creativity? Nothing really - just have a look at the photos which didn’t/couldn’t capture the mood and quality of the items.