Walking into the Chapel this morning we noticed a difference which Mary Reynolds rsm then alerted us to in her Welcome. The footwear on the focus space had changed into dusty sandals. These pilgrims are on a journey and there is clear evidence of that in signs all around us: on the focus space, in our interactions in the hallways and groups, in the smiles on faces now familiar to us... In the words of our Opening Prayer: 'We have begun our third day, nourished and supported by our time together in Catherine's House... 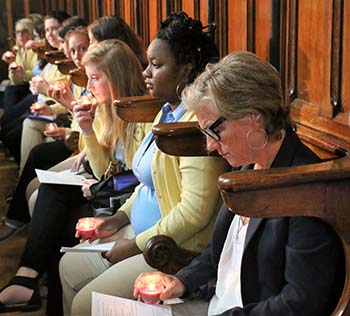 This morning's prayer, beautifully prepared by Kathy Higgins rsm, had as its theme 'Carry your Candle'. The theme was taken from the song sung by Kathy Triccoli', 'There is a Candle' which was our closing hymn.

We then received the light. MIC Staff (Liz, Madeleine) and volunteers Judy and Mary offered the light - individual candles in holders decorated with the YML logo - to each one.

The Closing Prayer was adapted from the prayer we have all been invited to pray for the pilgrims this week - They had become We. 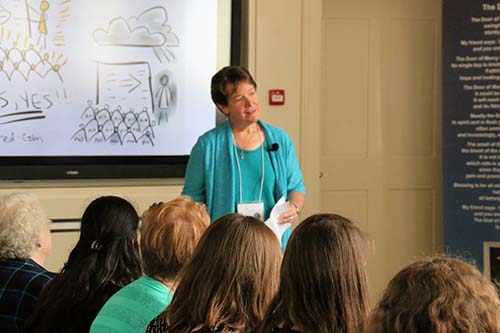 This morning's Keynote & Open Mic Session entitled 'Mercy-Filled Leadership: Catherine's friends, you and me' was given by Mary Kay Dobrovolny rsm. All present were invited to journal on what they value most about their own talents and leadership style before reflecting on what they know of Catherine’s story and Catherine’s leadership. In small groups each spoke to the quality they most value it in Catherine, relating it to their own leadership style or what they value about mercy-filled leadership. Final sharing took place in the large group with everyone contributing their reflections. Sr Mary Kay compiled the group contributions  into her powerpoint and all responses were then read aloud by two pilgrims, Honor and Mitch. The contributions can be read here (PDF). 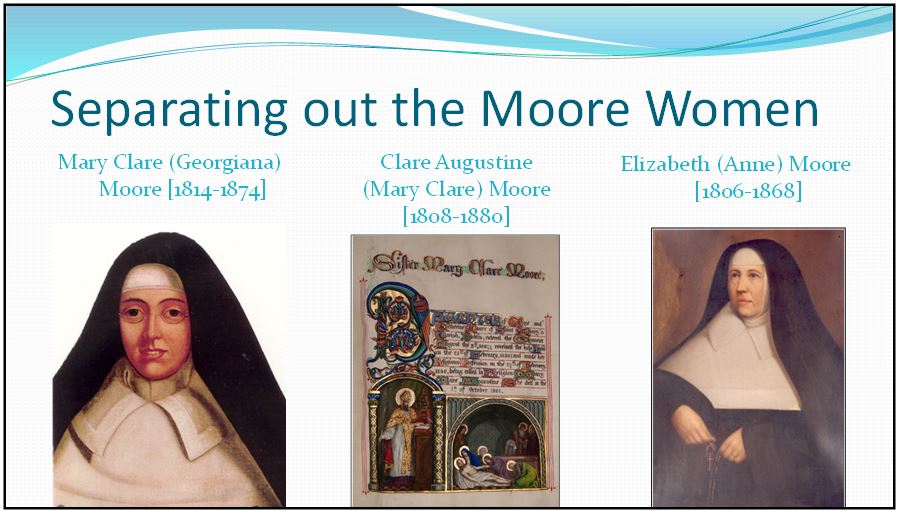 In the second half of the presentation Mary Clare Moore, Clare Augustine Moore and Elizabeth (Anne) Moore - were introduced as friends of Catherine. Their educational background, early years in Mercy, Leadership opportunities and Leadership qualities were identified.

Pilgrims were asked to identify similarities in their leadership style with those of Catherine, Mary Clare, Clare augustine and Elizabeth and to reflect on the gaps in their own leadership styles and consider if one of the four Mercy women might serve as a role model for them.

As reported yesterday, there are 7 Workshops on offer and all pilgrims attend all Workshops. Here is an outline of some of the Workshops: 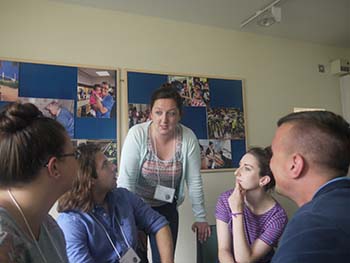 Ruth Kilcullen, Campaign Manager of MECPATHS (Mercy Efforts to Counter Child Prostitution and Trafficking in the Hospitality Sector), an initiative of The Congregation, explored the issue of human trafficking, particularly child sex trafficking. Human Trafficking is a focus issue for MIA. Commodification, sexual violence, discrimination, harrassment and online were among the aspects addressed Two videos were shown in the workshop: Let's Talk About Sex and I Want to Be

Global Justice in the Context of the Year of Mercy.

Denise Boyle fmdm and Betty Lacey from Mercy Global Action (MGA) jointly offered this Workshop.
Sr. Denise began by recounting a story of how she received the most precious gift one can receive – water! Denise used the story to remind the listeners that an estimated 800 million people do not have access to clean water. She then held up a toilet roll and informed the young people that 1.3 billion do not have access to sanitation services. She also informed the group that millions of women, men and children are trapped in slavery with no hope of escape. Many families are in bondage for generations.

Betty focused on the problems created by the large mining corporations in various parts of the world including the Congo and Peru.

Denise and Betty introduced the workshop group to the UN Declaration on Human Rights and handed out a Digging at our Conscience Mining Tool Kit (PDF) that can be used to get the ‘grass roots’ to highlight Human Rights breaches - especially in the area of mining. Input on the Sustainable Development Goals (SDGs) was followed by a question and answer session and a discussion on sustainable development. Handouts included MGA's SDG pamphlet (PDF)

Ivette Diaz rsm: 'What is it you plan to do with your one wild life? (Mary Oliver)

Sr Ivette’s workshop  was designed to deepen participants understanding of Vatican 11’s universal call to holiness Within this call is the call to serve other humans on the pilgrimage of life. Ivette who is a vocation minister also included guidelines on discerning vocational and other choices in life.

Her message to the young people was similar to the message of Pope Francis to young people when he visited Brazil. in which he challenged them to build a new world based on tolerance and love.

A selection of amazing photographs challenged both the emotions and attitudes of the young adults, presenting world of poverty, tragedy and suffering and yet of compassion and hope.

Sr Ivette ended the session by asking the participants to reflect on how they have experienced mercy in their own lives.

Mercy Volunteer Corps, which is sponsored by the Institute of the Sisters of Mercy of the Americas, promotes social change by placing and supporting volunteers for one year of service with people who are poor and marginalized in the United States and South America. Keri Young and Elizabeth Mc Neil who work with the Corps presented on the vision that gave rise to and sustains the volunteer movement. They invited the participants to dream, to reflect on their gifts, to discover what they are passionate about and to develop a vision for the future.

They invited the enthusiastic young people to consider volunteering with the Corps for one year. Volunteers work in their own professional field with people who are economically poor and marginalized. The volunteer movement is highly organised and staffed by people who have already had experience as members of the corps on mission. During their time as volunteers the young people usually receive more from the experience than they give.

Kerri and Elizabeth highlighted their presentation with stories from their own experiences as members of the Corps.

While the Mercy Volunteer Corps is based in the United States of America, people from other nations can also become volunteers. Elizabeth and Kerri gave practical advice on what steps the young people could take to make their dream of making a contribution to humanity a reality.

Dinner was Pizza - 60 of them were brought in! A social evening followed hosted by Georgian Court University.

We will bring you our final report tomorrow.

The program (PDF) will run until Friday night. You are invited to follow online the life and energy of these days with our daily updates on the mercyworld.org website, on Facebook @MIA Young Mercy Leaders and on Twitter using the hashtag #YML2016.